Continuing our look at modern maths methods, in this post the topic is column addition.

The addition is set out in the traditional column way. When children first use this method they may be asked to add the tens first, and then the units. The answers to these partial sums are written one below the other, making sure that the digits are written in the appropriate columns. The answers to the partial sums are then added to give the final answer. Adding the tens first makes it easier to relate column addition to addition using partitioning.

Once familiar with column addition, children move on to adding the units first. Click on the image below to see examples of expanded column additions. 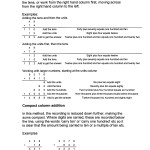 The final stage is compact column addition, which is what most parents are probably familiar with. The modern maths way of describing what is happening at each stage of the calculation may be less familiar though.

You may be wondering what the point of going through the various other stages and methods is, rather than working on compact column addition straight away. The idea is to work towards compact column addition, making sure that children have a clear understanding of what is happening during the calculation, rather than simply learning how to carry out addition mechanically.

Calculation policies vary from school to school. Your child may use all of the addition methods covered in this post and the previous one, or only some of the methods.

This day in history...